In praise of: bicycles as a civilising influence

“The bicycle is the most civilised conveyance known to man. Other forms of transport grow daily more nightmarish. Only the bicycle remains pure in heart.”

So wrote Iris Murdoch in The Red and the Green. I couldn’t agree more, although I’ll admit that the evening “rush hour” in Amsterdam can feel anything but civilised, particularly at the height of the tourist season when trying to navigate Damstraat on two wheels. Nonetheless, I’d argue that the dominance of the bicycle as a mode of transport in this city is one of the factors that makes it such a pleasant and popular place to live.

Of course Amsterdam’s love affair with bicycles is well known. A place that isn’t (or wasn’t) often thought of as a cycling city is Paris, one of my favourite cities. I met my wife there in 2002 and have many happy memories of living and visiting. It was only on a recent visit that I realised how quickly the bike has become an integral part of the fabric of Paris, primarily through the success of the Vélib scheme. This city-wide, low cost, public shared bike rental scheme was not pioneered in Paris, but its success there is arguably surprising – it would not have been thought of as a bike-friendly town –  and all the more welcome for that.

I was strangely disappointed to learn that the system is available to everyone to use, including tourists (at least if you have access to a bank card to which a pre-authorised €150 deposit can be charged). I had visions of local Parisians gliding past the throngs of tourists as they went about their business. But having benefitted from it myself as a tourist recently I’m all in favour of it. If you’re diligent about switching to a new bike every 25 minutes or so, you can get around Paris on two wheels for €1 per day, the cost of a daily temporary pass. And even if you pass the 30 minute mark, the next half hour costs just €1, so it really is great if you’re travelling on a shoestring.

Cycling in Paris requires keeping your wits about you – even if you avoid the chaos of the Place de l’Etiole around the Arc de Triomphe or Place de la Bastille, cycle lanes are few and far between and where they do exist they’re a good deal narrower than in other cities. I suspect the situation is improving all the time, particularly as drivers get used to the fact that Vélib is there to stay. Of course even if they do roll out more dedicated lanes and make the one way systems more bike-friendly, they won’t be able to do anything about the hills up to the Panthéon or Montmartre!

The Iris Murdoch quote above refers to the civilised nature of cycling, and I wondered in Paris whether the increasing presence of bikes in the life of the city was in any way related to the fact that the service we got throughout the weekend, in bars, restaurants, shops and the hotel, was incredibly friendly and not at all in line with the usual infamous Parisian rudeness towards tourists. I like to think that a population that spends more time in the saddle is more likely to be friendly, relaxed, healthy and laid back out of the saddle too. Look at Amsterdam! Is that effect beginning to take hold in Paris too…? 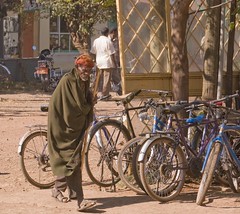 Finally, it was when travelling in Ethiopia in 2008 that the thought of the civilising influence of the bicycle first occurred to me. It’s a wonderful country, but the cities and towns are often choked with diesel fumes as banged up old cars and scooters careen every which way through the streets. Addis Ababa has its charms, but walking along the dusty roads is not one of them. What a nice surprise it was, therefore, to arrive in the town of Bahir Dar, on the shores of Lake Tana. We couldn’t quite work out what it was that make the place seem so different to the other towns we had visited in Ethiopia and elsewhere in Africa. Then it dawned on me: almost everyone used a bicycle to get around. There were far, far fewer motorised vehicles and as a result the air was cleaner, the streets filled with more friendly sounds, and a less hectic pace of life reigned. Of course it’s also relevant that the city itself is well designed in comparison to other places in the country, and so perhaps more bike-friendly, but there’s no doubt that the very presence of so many bikes makes it a nicer place to be. If they were to be displaced by cars, scooters, vans and buses it would be so different.

One more quote to finish:

“When I see an adult on a bicycle, I do not despair for the future of the human race.”  H.G. Wells. Well said!