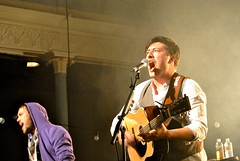 We were late in discovering that Mumford & Sons were playing in Utrecht last Monday, so we turned up to a sold out show without tickets. Fortunately we picked up a pair of tickets at face value (€15 each) from someone who’s ill friends couldn’t make it. Hurrah!

The band was recommended to us by various friends last year and we finally got around to downloading the album, Sigh No More, a couple of months back. From the start there was something about them that just didn’t sit right with me. Seeing them live has made me realise more clearly why I felt like that. But first, the good stuff: they make a great sound, with Marcus Mumford’s acoustic guitar driving things forward and his powerful vocals  lifting every song. Almost every song builds to a great crescendo, usually with four voices singing in harmony. Speaking of which, one of the strongest songs was the almost a capella Timshel, with the four voices blending to great effect in one of the more subtle moments of the evening.

Having said all of that, I’m still only giving the gig three from five stars. Seeing them live I got the distinct impression that they’re something of a one trick pony. The template: start with some slow plaintive lyrics over some gentle guitar, then the banjo kicks in over a driving guitar rhythm, a few oohs and aahs in harmony, then a big chorus repeated over and over again, with maybe a short verse thrown in for variation. And for some songs they just jump straight into the fast bit. All of which would be fine, but it got a bit tiresome for me after a while, particularly because (and this is probably my biggest problem with them) I don’t think the songs are actually about anything. The lyrics just wash over me, with some clever couplets that sound good at first, but lose their meaning when they’re repeated over and over. If you strip away the full band and imagine the songs being sung solo, I don’t think there’d be much to them.

Maybe I’m being unfair…but if you can’t be unreasonable on your personal blog, where can you?! Nadine enjoyed the gig very much, and we have good friends in Ireland who saw them in Dublin earlier this year and had an amazing night. I would imagine the experience is a little different if the crowd is singing every word of every song with the band, which is usually the case when the Irish audience takes a band to its heart. The Dutchies did sing along on some of the choruses, but perhaps not in the way the music and act demands for it to work effectively. So for me, for this one gig, it’s three stars. I’ll still listen to and enjoy the album, but I’ll be watching with interest to see whether they can follow it up with something interesting. (They played two new songs, one according to the standard template and one a bit different but not all that good.)

A couple of other things: the drum kit sat unused for most of the gig. The lead singer played it for a couple of songs, but it seemed a bit forced to me. Percussion otherwise came from the driving acoustic guitar or from the keyboard. I think it would add a useful extra layer if they hired a really good drummer. The second thing to mention is how we all shuffled our feet  awkwardly when the banjo player, in the course of a rambling attempt at humour, apologised to the crowd for his inability to speak “Flemish”. Hmmmmm….maybe not the best way to endear yourself to a Dutch crowd. (They didn’t seem to hold it against him.)

Support came from Johnny Flynn. He plays lots of instruments and seems a bit posh. I wasn’t inspired to dig any deeper. There was another support act before him, but we were still outside seeking tickets at that stage.