From Anne Frank to Ajax: some thoughts about words and freedom

Last Sunday Amsterdam’s local football team Ajax won the Dutch championship (the Eredivisie), beating FC Twente 3-1 and bringing thousands of fans onto the streets to celebrate. Bars all over town were thronged with people craning to get a look at the screens for what was, I’m told, an exciting match. Towards the end of the second half I was just entering Prinsengracht 263, the house where Anne Frank and her family hid from the Nazis for more than two years, before an anonymous tip-off led to their arrest and deportation. I hadn’t visited the Anne Frank Museum previously and I read the famous diary for the first time last year. (Tip: if you’re planning to visit the Anne Frank House, skip the often lengthy queues by booking your tickets online in advance. This is even possible if you have a museum card. You’ll be given a 30 minute time slot within which to show up at a dedicated entrance.)

At the time when Otto Frank decided to go into hiding with his wife, two daughters and four others, life for Jews in Amsterdam had become very difficult with heavy restrictions on their business, personal and social lives. Walking through the spaces where those eight people hid for so long without being able to set foot outside, having to remain completely silent much of the time so as not to alert the workers in the warehouse below, it brought home to me in a very immediate way how “real” this experience was. I have previously visited Auschwitz concentration camp, but it’s very hard to comprehend the immensity of what happened there. I think this quote from Primo Levi is apt:

“One single Anne Frank moves us more than the countless others who suffered just as she did but whose faces have remained in the shadows. Perhaps it is better that way; if we were capable of taking in all the suffering of all those people, we would not be able to live.”

We would not be able to live. Probably true. 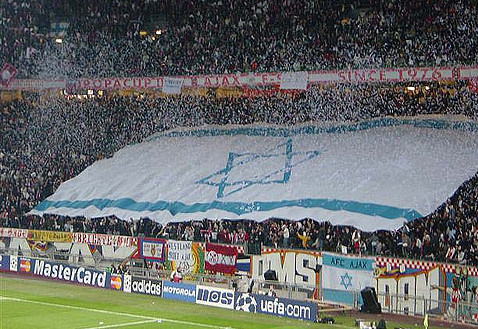 Ajax fans with an Israeli flag

As I was about to walk up the steep staircase to the formerly hidden entrance to the secret annex, I heard a crowd of men walking down the street outside shouting “Joden, Joden, Joden” – Jews, Jews, Jews. At first I was confused: how could people be so ignorant as to heckle the people visiting the Anne Frank House? Then I realised these were Ajax fans celebrating their win. Historically Ajax FC is associated with Amsterdam’s Jewish community, apparently mainly due to the club’s ground having originally been located close to the Jewish quarter. These days, as with Tottenham Hotspur FC in London, the clubs fans embrace “their” Judaism, chanting “Joden, Joden” at matchs and waving the Israeli flag.

It’s a strange feeling to stand in the Anne Frank House and hear “Jews, Jews” being chanted in an aggressive-sounding manner just metres away. The Dutch have a word that’s relevant in this situation: geuzennaam is a kind linguistic re-appropriation, where a term that’s considered to be pejorative is “re-claimed” by the group at which it was aimed. (The word comes from Geuzen, a name assumed by a group of Dutch Calvinists who opposed the Spanish occupation in the 16th century – full explanation here.)  The classic example of this is how the word “nigger” is used by some sections of the African American community in the USA.  Of course Jew is not a pejorative term – the debate in London centers around the Spurs fans using the term “yid” – but in proudly chanting the word Jews, the Ajax fans are taking back an appellation that is usually used in a negative way by opposing fans. Nonetheless, it felt distinctly uncomfortable to be standing in Prinsengracht 263 listening to the chant of “Joden, Joden” outside while reading about the atrocities committed against Jews in the past. I’m not completely sure why it felt so uncomfortable, but it did.

After visiting the Frank family’s hiding place and seeing the diary itself, visitors are brought to a modern museum building where exhibitions explore themes of freedom and discrimination. The current exhibition, Free2choose, presents short films about current debates, ranging from the wearing of head scarves at school or the display of crucifixes in classrooms, to the publishing of Hitler’s Mein Kampf or the targeting of illegal immigrants in Amsterdam. After each 30-60 second film, visitors can vote on a question presented on the screen. The results are presented immediately, both based on the responses of visitors present at that time, and collated for all visitors. It’s a really well thought-out and thought-provoking exhibition that clearly illustrates the shades of grey we are faced with in daily life.

I believe in freedom of expression and I am opposed to discrimination (of course). I believe we cannot prevent Spurs fans from proudly calling themselves yids, no more than we can (or should) stop Ajax fans from calling themselves Jews (even if they’re not!). But we also should not ban the publication of books, no matter how objectionable nor should we ban people from wearing certain items of clothing. It’s up to civil society to continue to expose and fight discrimination and to promote equal rights and responsibilities for all people. The legacy of Anne Frank, and the work done by the museum honouring her, plays an important role in that mission.