Packing for our upcoming move I came across a printout of this great photo of Mulligan’s Pub, Geneva, that my friend Marc sent me when we were living in Amsterdam. He stumbled across it online when searching for inspiration for his basement makeover. It was taken just before a night when I played there in 2008. If you click for the big version you can make out my name beneath that of Gus Glen on the blackboard in the centre. 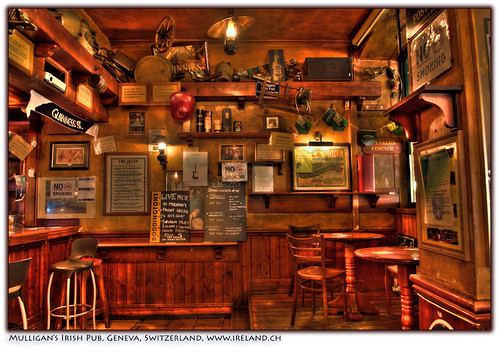 The photo was taken by a guy called Tim Dempsey who has a bunch of good photos on his Flickr stream.

As for Mulligan’s, well I don’t get down there so often any more. It was the scene of many memorable nights for me, musical or otherwise. I’m hoping to find a reason to sing there again soon-ish. Watch this space.

In the meantime, here’s a song I forgot I had written until YouTube suggested it to me at the end of one of my own videos.